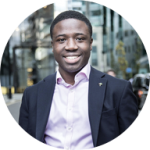 Reggie grew up in a difficult environment where he didn’t have positive role models to say, ‘When I grow up I want to be like them’. Reggie came up with a bold idea: to go to London’s wealthiest neighborhoods, knock on doors and ask people what they had done to amass their wealth. Reggie went from a youth with no future, knocking on doors to a graduate and a successful analyst who also mentors youth from disadvantaged backgrounds. One of Reggie’s biggest achievements was meeting the Prime Minister Theresa May, to discuss his fresh ideas.